Enter His gates with thanksgiving, and His courts with Praise! Give thanks to God and bless God's name. Psalm 100:4
Menu
Facebook-f
Twitter
Instagram
Youtube
Menu
Menu 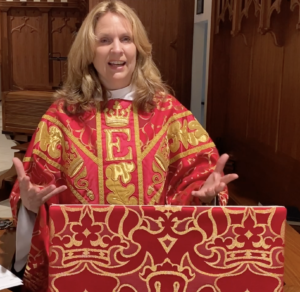 The Reverend Jenifer Chatfield has served parishes in the Los Angeles area and in New Haven, Connecticut. She most recently came to St. Edmund’s after serving as the Priest-in-Charge at St. Wilfrid of York Church and Pre-school in Huntington Beach. Previous to St. Wilfrid’s she served at St. James’ in the City in Los Angeles as the Interim Rector and formerly the Associate for Liturgy and Formation.

She has extensive creative, academic and administrative experience; before being called to ordained ministry, she had a varied career in the Theatre and Film businesses in both L.A. and New York. Along with a B.A. in drama from UC Irvine and an M.F.A. from the School of Film and Television at UCLA, she has a Master of Divinity degree from Yale Divinity School, received her Diploma in Anglican Studies from Berkeley Divinity School at Yale and is a graduate of the Yale Institute of Sacred Music where she focused on Liturgical Studies and the intersection between art, music and religion. 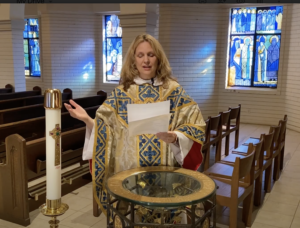 We hope to see you this Sunday!