All public services and events at St. Edmund’s are currently suspended. 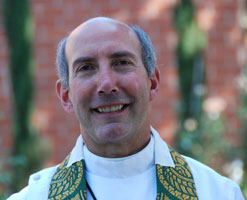 The Reverend Canon George F. Woodward III was born in Pennsylvania and grew up in Columbus, Ohio. He received his bachelors degree from Ohio University, a Masters in Theology from Ashland Theological Seminary, Ashland, Ohio, and a Masters of Divinity from Seabury-Western Theological Seminary in Evanston, Illinois.

He was ordained in 1983, and served for five years as Associate to the Rector at All Saints-by-the Sea in Santa Barbara. He served for two years as Assistant to the Archdeacon of the Aegean, working with Anglican churches and American military chaplaincies in the Republic of Turkey. Following his return to the United States, Canon Woodward was for four years Rector of St. Timothy’s, Apple Valley and Dean of the Eastern Deanery of the Diocese of Los Angeles. He became the Seventh Rector of St. Edmund’s Church in 1995.

Canon Woodward is the Chair of the Program Group on World Mission for the Diocese of Los Angeles www.ladiocese.org,  and Vice-President for the international board of directors of Foundation Cristosal  www.cristosal.org,  a human rights-based organization dedicated to community development within El Salvador, working together with the Episcopal Church and the Anglican Church of El Salvador www.elsalvador.anglican.org.

Together with Frederick Borsch, the retired bishop of Los Angeles, he is the author of INTRODUCING THE LESSONS OF THE CHURCH YEAR, which may be found at www.amazon.com . His new bookTHE PRAYERS OF THE PEOPLE, liturgical prayers keyed to the Revised Common Lectionary, is due out from St. Mark’s Press in 2013.